As an employer, one of your biggest safety concerns is ensuring that your workers aren’t fatigued on the job.

Employees need to be responsible for their own sleep habits. But employers need to be aware that safety performance decreases as employees become tired.

It may not sound like a serious issue, but it is: A study in the Journal of Occupational and Environmental Medicine said fatigue cost U.S. employers more than $136 billion per year in health-related lost productivity – $101 billion more than for workers without fatigue. Eighty-four percent of the costs were related to reduced performance while at work, rather than absences. 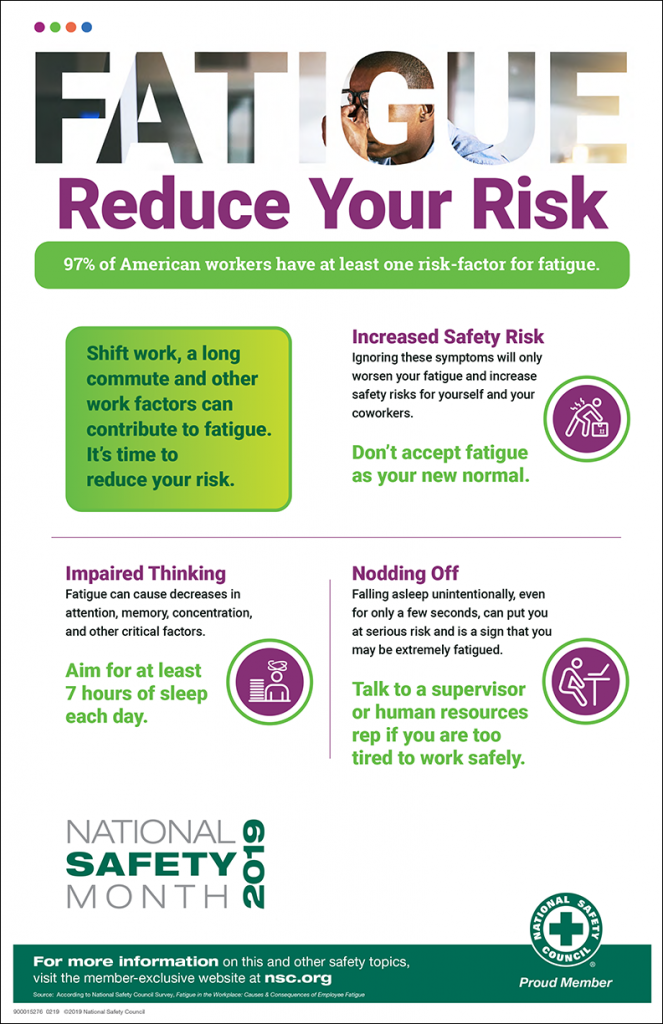 Studies show that the more hours employees work, the more they risk injury. The combination of lack of sleep and long or erratic work hours can be dangerous.

“Injury rates are highest among workers who generally sleep less than seven hours per day and workers who typically work more than 40 hours per week,” according to the National Safety Council (NSC).

The Bureau of Labor Statistics doesn’t track fatigue-related incidents, but one study shows workers with sleep problems have a 1.62 times higher risk of injury than workers without sleep problems. The study also estimates that about 13% of work injuries can be attributed to sleep problems.

Jobs that disrupt natural sleep patterns often make workers sleep-deprived. The worst are rotating shifts, because employees can’t adapt their body clocks to an alternative sleep pattern. Be sure to make your employees on night shifts, irregular shifts or longer shifts aware of the importance of getting enough snooze time.

Of special concern are employees who are required to drive. NSC has gathered research that shows:
• You are three times more likely to be in a car crash if you are fatigued.
• More than 5,000 people died in drowsy-driving related crashes in 2014.
• Losing even two hours of sleep is similar to the effect of having three beers.
• Being awake for more than 20 hours is the equivalent of being legally drunk.

Adults need an average of seven to nine hours of sleep each night, but 30% report averaging less than six hours, according to the National Health Interview Survey.